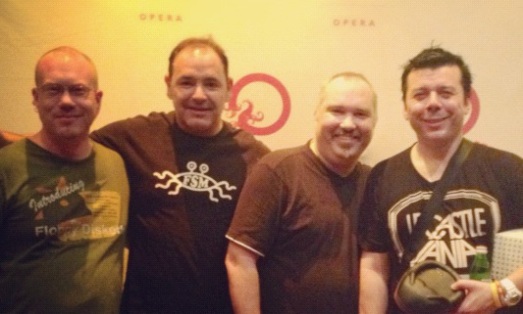 The XMage and I first met in North Carolina at Lotusphere Comes to You in 2007. We had collaborated on some open source projects before, but had never been in the same room until that point. I was smitten. And I managed to convince my bosses at the time to make him an offer. He accepted and our worlds were forever changed.

Over the last 7 years, Tim and I shared a deep collaboration that, while it faced its share of struggles, stemmed from our enduring friendship. It saddens me that we’ll never get to finish each other’s code blocks or pick a blog fight or present a session together again. It makes my soul ache that I’ll never get to roll my eyes at one of his cheesy puns or pretend we can dance at a music festival or be his wingman and introduce him to a pretty girl ever again.

Much has been and will be said about Tim’s genius and generosity and every word of it will barely scratch the surface of the contributions he’s made. Having worked keyboard-to-keyboard with him for many years, I would add that he always used both sides of his brain in every line of code, applying musical creativity and linguistic flourishes right along with his anonymous callbacks and love of ternary notation.

Unlike most of my readers, I knew a Tim who would sit on the floor and play with my dogs for hours after Christmas dinner. I knew a Tim who snored like an elephant after too many white Russians at Kimono’s. I knew a Tim who fought through a haze of tears to share with me the loss of his marriage. I knew a Tim who nearly punched a Dolphin network tech in the face while we sat backstage at Lotusphere watching months of planning and effort blow up in our faces. I knew a Tim who fell asleep sitting upright in a hotel bed trying to get just one more bug fixed before our big demo. I knew a Tim who would would come over to my house on a Sunday to write some crazy piece of code together, because while making a computer do what you want is fun, doing it with your best friend on a self-imposed deadline just because you can is positively gut-busting.

I wish I’d given him as much as he gave me.

EDIT: My friend Cheryl Spring shared this picture on Facebook and I thought it was too perfect to withhold.

22 comments on “My Friend, Tim Tripcony”